On 31st March 1854 the Portsmouth Burials Board held it's first meeting with the Rev. J Poulett McGhie (vicar) as Chairman and Charles Bettesworth Hellard (solicitor) the clerk of committee. The committee was convened following the passing of the 1853 Burials Act which provided that all Councils should administer their own cemeteries.

On 19th May 1854 the vestry authorised the purchase of 8 acres of land from Thomas Ellis Owen, the renowned Southsea architect and principle developer of Southsea in the 19th Century. The chosen area was at that time being excavated for brick earth. There were several acres around the ground that were being similarly used at that time. A further 1/2 acre across the road was acquired for ancillary buildings.

Mr. C M E Pineo (architect of Portsea) drew up plans for the 2 chapels, lodge, toolroom and enclosure walls and fence. Mr. W B Page (landscape gardener of Southampton) designed the layout of the ground. The fashion for winding paths is evident but the irregular plots and seemingly casual positioning of trees did not make for a methodical arrangement of grave spaces.

The estimated cost was £4,000 - £1,350 for land, £1,000 for fencing, £600 erecting chapels, £320 lodge and other erections, £180 for clearing land and compensation for crop, and laying out the ground £150. The 1876 extension was slightly more formal. The line of the original South wall is discernable by a change in ground level across a central plot, still called 'South Wall'.

Mr. Pineo failed to produce the plans and his services were dispensed with on 14 July. Mr. Thomas Ellis Owen was appointed architect and by 31 July his plans were completed. The lodge design is very similar to the architects own home, Dovercourt, in design and the Anglican chapel is reminisant of St Judes Church. The Romanesque dissenter chapel is unlike either of the other two buildings.1 1/2 acres set aside for dissenters. The entrance had simple piers and there is no formality in the position of the chapels.

The Anglican Chapel was consecrated by the Bishop on 27 Oct 1854. Burials took place from the beginning of November and the former burials grounds in the parish were closed.

Although much smaller than the other cemeteries on Portsea Island, Highland Road must have had the larger share of what might be called the "higher class" of funerals; many officers' families were living in Southsea and when the Burial Board approved plans for "tombs" at their meetings, the names included Admirals, Generals and many other officers.

The population of Portsmouth was increasing rapidly and the Burial Board began to seek extensions to the Cemetery in 1870. In October they made a provisional contract to purchase 10 acres on the south side of the Cemetery at £300 per acre. Estimated costs of buying the land, enclosing and laying out of the ground was £4,126.

In June 1876 it was approved by the Home Office medical Inspector. The Anglican portion was consecrated on 28 November 1879. 2½ acres were left un-consecrated, 1¼ acres being allotted to Roman Catholics. The size of the cemetery had now more than doubled to 18 acres. 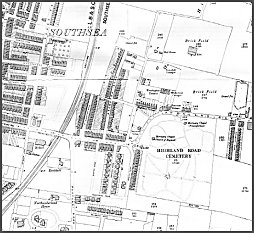 In 1899 there were 884 interments at Highland Road Cemetery.

The General Baptist chapel in St Thomas's Street was bombed in WW2 and the remains from beneath the chapel and yard were removed to Highland Road in 1944.

HRC closed for burials in 1956 except where space was available in family graves.

The cemetery is administered by the Cemeteries Manager at Portsmouth City Council. The offices are at Milton Cemetery, Milton Road and the telephone number is 023 9273 2559.